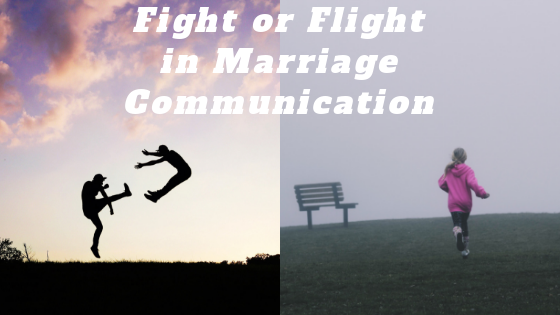 In my office, I see many couples that are dealing with conflict and communication concerns. In many of their stories, I pick up on a similar theme. Couples’ fights tend to go a little like the following and may take similar, but somewhat different forms:

A wife tries to talk to her husband about what is bothering her. Her husband begins to defend himself because he feels attacked. Next, the wife starts to push harder to be truly heard and understood by him because his defenses don’t make her feel validated and do not help provide a solution to her concerns. Finally, he shuts down and withdraws inwardly (becomes quiet and unresponsive) or outwardly (he leaves).

Does this sound familiar? Almost every couple I encounter has told me about a similar fight they have had. I have seen this interaction play out in my marriage and many relationships close to me. The example above shows fight and flight in both couples’ reactions. This type of interaction is natural in all relationships. It is a cycle that couples get into. The unfortunate thing is that many of us don’t understand what is happening at the moment and, thus, we can’t resolve the issue. We also struggle to find more appropriate ways to react to our spouses.

The fight or flight reaction affects relationships by causing a couple to blame each other for their problems, disconnect emotionally and physically, and increase behavior that leads to hurt and pain, whether intentionally or unintentionally. In these situations, underlying, ingrained patterns have been present for years. These patterns of behavior and emotions, drive the reaction to fight or flee a conflict.

What is Fight or Flight in Relationships?

Our ancestors from the time humans were created have always had instincts or innate reactions that serve a specific purpose. Most instincts serve a survival purpose. Fight and flight are two such instincts.

When faced with danger in ancient history, people did not have the safety of houses, weapons, or walls. They needed an inborn sense that told them how to survive by fleeing or attacking when faced with a dangerous situation. Fleeing means running as fast as one can from danger until a safe place is found. Attacking means taking action to defeat the danger before it defeats you.

I would call the fighting part of this the “element of surprise” instinct. Because attacking seems to come out of nowhere. Today, in the developed world at least, we do not face many immediate threats to survival. Yet, we still feel threatened in our relationships when conflict arises. Unfortunately, we still have these instincts ready to thwart any threat.

Why do we feel threatened in relationships?

Threats can come in many forms. Our emotions tell us what type of threat it is. When a person loses something or perceives loss, they feel threatened. People can be scared or anxious about losing loved ones, money, houses, cars, lifestyles, and more. These are all legitimate threats, but not of the survival kind that were present long ago.

These days, fear appears to be more present in everyday concerns, especially in marriage conflicts. For example, when a wife brings up a problem with her husband, he may “fear” he is doing something wrong that might result in losing his status in the relationship, losing power, or “getting his pride hurt.” Many men would not use the word fear. They would probably feel more comfortable with the words “worry,” “concern,” or “anxiety.”

Another example is when a husband asks a wife to do something for him. She may take offense to his request due to a perceived “threat” of being a “servant” or “submissive” in a culture that has fought so hard for women’s rights. However, this is not a threat that warrants a life-or-death outcome. The threats we face in recent years seem to be more “perceived threats” than realistic threats (dangerous or life-altering threats), especially in relationships.

No matter if it is perceived or not, the threat disturbs our peace and creates a real emotion that gives us the message that we are about to lose something important to us, or that we are unsafe in some way. Understandably, we feel so threatened in relationships. Relationships present us with so much to lose. Fights can sometimes make us feel emotionally unsafe due to the possible costs.

Are you struggling with communicating in your relationships? Tired of all the arguing?

This Couples Communication Workbook is just for you. Follow its guidelines, practice the skills, and see your connection grow. There is no guarantee because your partner has a choice too. However, do your part and get this workbook now!

How do Perceived Threats cause Fight or Flight?

Even though we do not face survival threats much anymore, we still have our instinct for fight or flight. Anytime we “perceive” a threat to the loss of anything we own, our identity, or our relationship, this instinct arises. Fight or flight is activated by our feelings. When we feel hurt or vulnerable, anger arises. Then negative reactions arise, such as: attacking, yelling, throwing things, slamming doors, or cursing. We fight to feel better or keep what is important to us.

When we are “attacked” verbally (perceived threat) by someone else, we may “flee” by leaving the room or shutting down and becoming quiet. Any time a loved one or partner attempts to initiate a conversation about something that bothers them, we may have the urge to either flee or attack based on a possible perceived threat. This reaction arises to protect what is important to us!

How Fight or Flight is harmful to our Relationships

Fight or flight is not usually helpful in relationships today, except when an actual survival risk is present, such as physical, sexual, or verbal abuse. When a survival threat is not present, the perceived threat is usually not realistic. Therefore, when a person flees or attacks, they are overreacting to the threat.

By overreacting they either push their partner away or they hurt their spouse. Usually, a person tends to lean towards one or the other instinct and thus creates a negative pattern in their relationship. This pattern is normally referred to as the Pursuer/Distancer pattern of relating.

If this “negative” type of relationship pattern continues, it may result in resentment that leads to the couple feeling disconnected. The longer this pattern exists in the relationship, the wider the separation in the couple’s connection. It becomes harder for a couple to reconcile their differences the longer the disconnect exists. So, the instinct in us that drives us to survive can result in harmful effects on the relationship if they go unchecked.

The Benefits of Fight or Flight in Relationships

However, fight or flight is not all bad for a relationship. These instincts can drive people to fight for the survival of the relationship. Humans desire to keep the things that are important to them. They don’t want to lose what they have worked hard for or sacrificed so much for.

So, if a couple can recognize that all might be lost, then “fighting” may help reverse the negative pattern that exists.  Fighting in this sense means putting a lot of effort into saving the marriage. Some people also flee to keep from making things worse, which is not a bad reason to leave. It’s not good to make things worse, but outright leaving may be too much.

What do we do about Fight or Flight to Help our Marriage?

So what do we do? We must find balance. We must learn to communicate healthily and effectively. Making small successes in using the strengths of these instincts can help. Recognize that each other’s reactions are not wrong and bad, but are an attempt to be safe and salvage what is good.

Learning how to communicate more effectively would be a good start. Learning how to resolve conflicts and find compromise can also be helpful. Finally, taking a break from communicating can be beneficial to keep tensions from overwhelming each other.

Again, if you would like to get my Couples Communication Workbook to obtain these skills go HERE.

If you have any questions, need help with your relationship, or just want to set up an appointment, please call 706-955-0230 or email me.

CHECK OUT THESE WORKBOOKS

5 Tips to not “Fighting” in Marriage Communication
Scroll to top