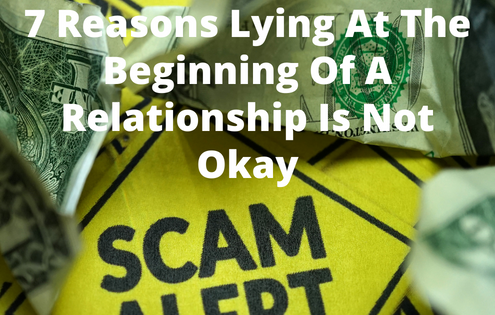 The other day, I was asked why someone’s relationship had gotten so far off the rails. My first thought came as a question: Did the relationship begin with dishonesty? As I pondered this more, I wondered if I could help people entering relationships to make sure that they stand a fighting chance. It’s never good to start any relationship off with a lie, but let’s look at 7 reasons beginning a relationship with dishonesty spells doom.

Let’s say you tell the person you are dating that you grew up poor, even though you didn’t. Eventually, if you stay together long enough, they are likely to find this out. There are all sorts of reasons my someone might want to tell a lie: maybe to look good, to hide their past, or other reasons. Unfortunately, this does not seem to be a good strategy for developing a relationship. So below are my 7 reasons lying at the beginning of a relationship is not okay.

Honesty and Trust: The first Building Blocks of a Relationship

When you are starting a relationship, you need to create a good foundation so it will last. As you move through the phases of dating, courtship, engagement, and marriage, the more a couple needs deep trust and honesty. Any break can be problematic. I have seen so much hurt and pain the further into a relationship that a lie is discovered, especially if it happened early on.

Not all lies are the same. Depending on the nature of the lie, the effects may not be as disastrous. Even so, trust is broken. For you to have the relationship you REALLY want, you need to be honest, open, and vulnerable from the beginning, which helps in building trust.

Lying can be considered betrayal

Dishonesty at the beginning of the relationship is hurtful. If an untruth is not shared, it can be considered betrayal. Why do I say that? Because the longer the truth is withheld, the longer you chose something else over faith in your partner’s grace and love. They will feel rejected.

Affairs and cheating are not the only forms of betrayal. If you lie, manipulate, or hide things, it can be considered betrayal. You placed something else above your partner. Your partner at that moment will question if they can count on you or if you are for them when they need you.

You took away your partner’s right to choose

Would you like your rights and freedoms taken away? I can hear a resounding “NO!” I wouldn’t either. However, this is what happens when dishonesty comes at the beginning of a relationship. You are not allowing your partner to choose their fate.

Let them choose their suck, as some people would say. I know that isn’t nice, but that is truly what you are thinking if you lie at the beginning of a relationship: “I suck, so I won’t let them know.” They deserve the right to know what they are getting themselves into. Plus, if they choose you despite your problems, that means they like you for you.

You are beating yourself

When you tell lies to a potential partner at the beginning of the relationship, you are losing. You are making yourself look better than you are, so you are going to have a higher than-likely chance of failure later. Why do that? Just start at baseline. You will have a higher chance to succeed if you do.

Don’t give someone higher expectations of you if you can’t meet those expectations. It’s one thing if they want to push you to become better. It’s another thing if they already believe you should be where you are not. The relationship could fail if you tell a lie about yourself and that would likely be because you can’t measure up to who they think you are.

All lies inevitably come out

Don’t get into the, “I’m special” trap. You are not. The Bible says that God will reveal all things. You may think it will be at another time, but don’t be too sure. I have seen so many lies come out that people were going to carry to their grace. You never know when that day will come.

Again, I know it depends on the size of the lie. I still believe you should be honest, because you don’t want to change your partner finding out the truth before you “get the chance to tell them.” Don’t lose. Win! Even telling them sooner than later may spell victory for you!

Oh, how these words haunt me! When I hear that in couples counseling, I know that this spells disaster. It’s hard to help someone come back from that thought. It’s panic time for me because now I have to find a way to convince them otherwise.

This comment means they don’t have a leg to stand on in the relationship. The commitment is not there. They have both feet out the door and may be running for their lives. Dishonesty, especially at the beginning of relationships can make a person feel like they don’t know who they are talking to. They feel they were living a lie the whole time. Don’t let that be you.

When you tell a lie at the beginning of a relationship, you ARE being selfish. You are choosing your happiness, safety, comfort, and more, over your partner. You aren’t thinking about their pain or other problems you might be causing.

The damage can be far-reaching. You can’t develop love, connection, or trust. They will feel something is off, but they will try to deny it in their heads. You have convinced them now to not pay attention to their own internal sense. They could even start questioning their reality. This is not what you want!

When you start a relationship, you want to start it on the right foot. If you begin with lies or bad behavior, you are building on a weak foundation. It doesn’t mean that you can’t over time build a strong foundation, but that involves changing the behavior, being genuine, and honesty. These 7 reasons why lying at the beginning of the relationship are sometimes obvious, but we don’t always keep these truths in front of us to make the right decisions.

Don’t let your relationship begin on a crumbling foundation. Choose today to make it right and if it last, then you will know that you have true genuine love and connection.

Does Lying Cause PTSD in Relationships?

What is trust?
Scroll to top